West Chester 21Jan17 Noon.   Rally called by Chester County Democratic Committee to show solidarity in the face of the GOP carnage to come. 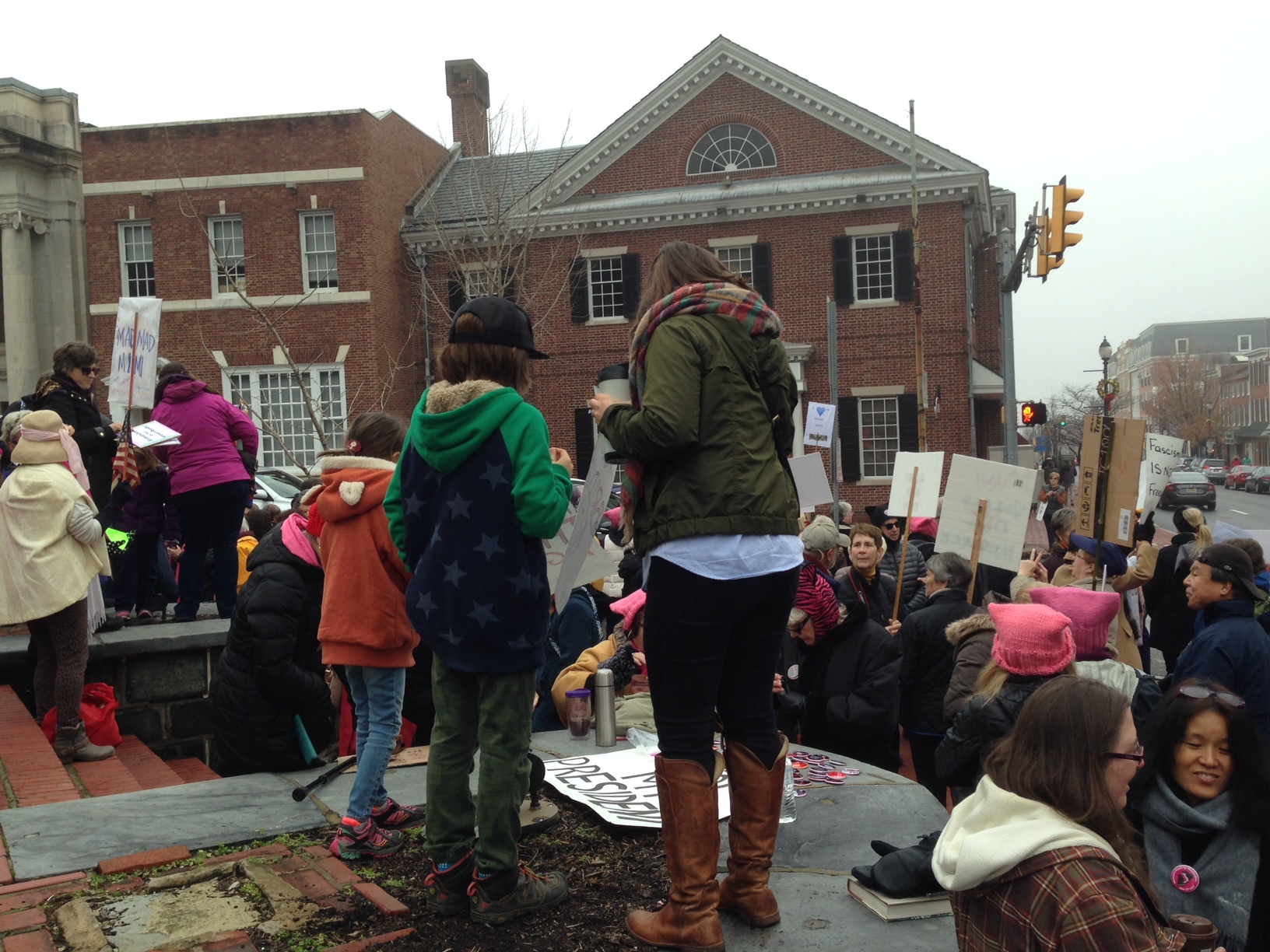 An estimated 200 citizens assembled at steps of courthouse for about an hour.  As at any gathering of Democrats the people were diverse, colorful, and stoically cheerful.

Drive by supporters honked hundreds of times.  Smiles and thumbs up were even more frequent.   Of course a few registered their opposition.  Revving engines must be a thing.  At least one sputtered a string of the usual unimaginative 4-letter expletives.

One sign that many agreed with was, “Make America Think Again”.

Congressman Ryan Costello quietly slid through the crowd; and back again.   He is over 6 foot tall!  A few folks button-holed him.  I was un-successful in getting him to address the assembly.

I was excited to meet my Congressman.  I was un-prepared.  What followed was initially a failure to communicate.

I asked if he disagreed with the crowd here?   He disagrees with “Trump’s style”.  Huh?  (It’s much more his substance over style).

He asked about my major concern – War I said.  Him too.  South China Sea, Jerusalem,.., Estonia.  He pointedly asked a few times about Estonia.   I mentioned that sanctions lifted would be a green light.  (I should have said: Putin wants his countries back).

He mentioned accountability.  I held that Congress was accountable to constituents.   He responded that “Congress’s job was to hold Executive accountable”.  I suggested Congress’s role is more than policing the president.   At this point Rep Costello said I was argumentative and walked away.

A woman approached him. I overheard Rep. Costello respond about healthcare repeal. “Don’t worry 2-to-3 years out”. “Efficient delivery”, “high risk pools”, “Pre-existing condition was the most” salient.  No details since plans lack “specificity”.

Another bite at the apple…

I asked Rep Costello, “specifically”, will those relegated to high risk pools have higher premiums?  There will be a “government backstop”.  He went on: Do I know what the risk pools are? “of those not covered by employer, Medicare, or Medicaid, there are only 250,000 people with pre-existing conditions”. Out of ~20million people on ACA only 1 in 80 have a pre-existing condition??

Rep Costello again told me I was argumentative and didn’t know what I was talking about.

I wish my camera had a good battery.  I hope more and more will come out to show solidarity.